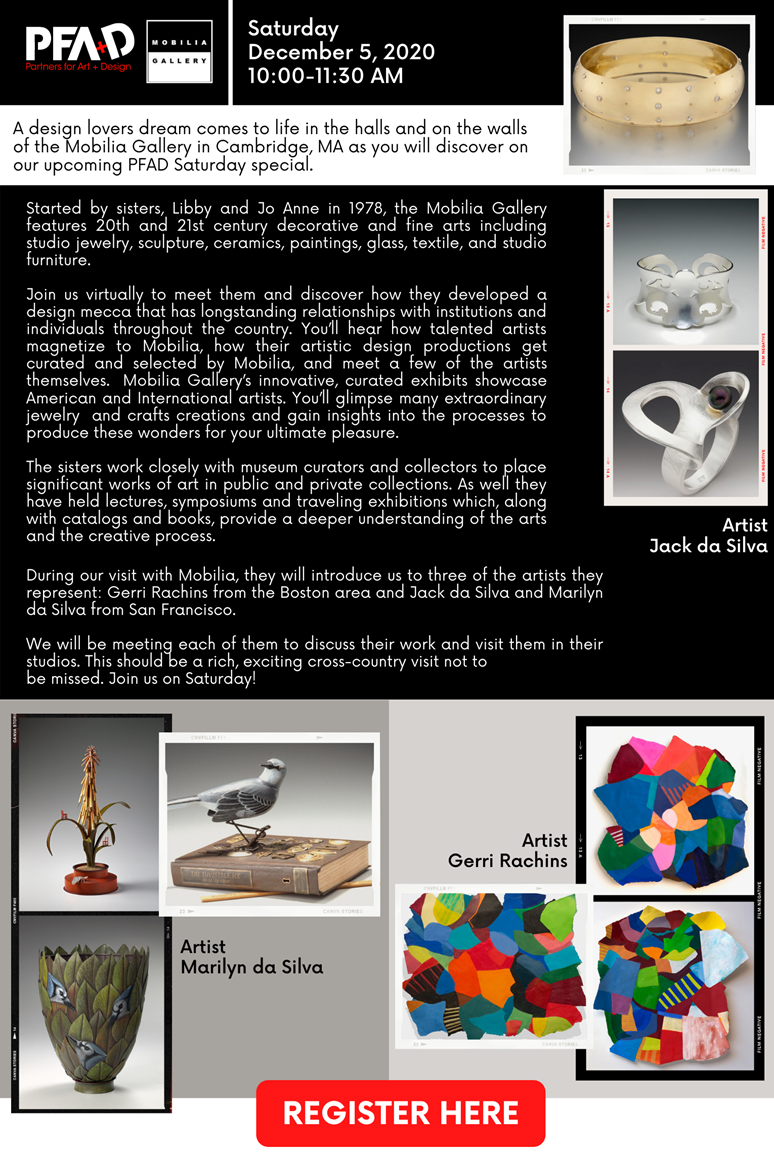 Reﬂecting on the artist’s fascination with the natural world and how we perceive it, Rachins’ works tease the eye with colors and shapes that shift and slip, prompting viewers to question their own perceptions, while suggesting a world in ﬂux. Her works ﬂaunt art-historical tradition, playing with the boundaries between painting, drawing and collage, using materials unexpectedly, and infusing the work with her own sense of alchemy.

Rachins’ artworks are part of private and public collections, including the Museum of Fine Arts, Boston, the Danforth Art Museum, Fidelity Investments, and others throughout the United States. Her paintings, drawings, and mixed-media collages are represented in the Boston area by Mobilia Gallery in Cambridge, MA.

The origin for these paintings began with a walk on a beach in Miami. My eyes were attracted to small bits of bright colors in the vast beige ﬁeld of beach sand. This visual experience reminded me of looking at a roll of unprimed canvas stretched out on the ﬂoor, with small colored jewels dispersed throughout.

As I approached, the colored bits were revealed to be small individual pieces of residual plastic that had washed up from the ocean onto the sand. No less interesting to me, I collected as many pieces as I could ﬁnd, and placed them in a plastic bag. When I returned to Boston, I brought the plastic bag to my studio, released the plastic bits on a tabletop tray, and then began to play with them, inspiring me to create the POPROCKS painting series.

In each painting, the interactions between elements of color, shape and pictorial space are often intentionally rendered with ambiguity, in an effort to undermine “ﬁrst glance” assumptions. The shapes were initially torn and cut from unused cotton rag paper, glued onto rectangular three-dimensional panels, and then painted with oil paints. At times, the POPROCK paintings appear to be ﬂat two-dimensional collages, projecting slightly out from the wall, hovering with uncertainty in the viewer’s actual three-dimensional space.

Between the eye looking and the mind thinking, assumptions about what is real and what is illusion are made.

Marilyn da Silva is Professor and Program Chair of the Jewelry/Metal Arts Department at California College of the Arts in Oakland where she has been since 1987. Her work has been displayed nationally and internationally, including: THE 2011 Taipei World Design Expo-International Craft Design Exhibition, The Seoul National University Museum of Art, The Design Museum, Helsinki, Finland, National Gallery of Australia, the Victoria and Albert Museum in London and the National Gallery of Australia. She is represented in many public and private collections including The National Gallery of Australia and The Museum of Modern Art, Korea, The Victoria and Albert Museum, London and has been featured in numerous books, magazines and catalogues, including The Penland Book of Jewelry, Lark Books and Teapots, Makers and Collectors, Schiffer Publishing Ltd.

“A true pioneer, Marilyn devised and refined the application of gesso and colored pencil on metal. This alternative process became the visual language in which she could express her infinite imagination in sculpture and jewelry”  — The Penland Book on Jewelry, Lark Books

Marilyn da Silva’s work is based on telling stories through imagery and representational elements. Her trademark surface treatment of gesso and colored pencil creates a rich palette for her sculpture and wearable pieces. In the artist’s own words, ”Color on metal is like icing on the cake”.

Flora and fauna are frequent subjects for Marilyn, and she writes, “Birds have been an integral part of my work since 1999. They act as metaphors for everyday experiences, from personal to universal, in my sculptures and wearable pieces.”

“Marilyn’s work is special not only because it interestingly tells stories using realistic, natural, and beautifully crafted elements such as birds and flowering branches, but because of the unique technique she developed for adding color to the metal objects. Her love of drawing led her to embellish the surfaces of her metal sculptures with gesso and colored pencils rather than using chemical patinas. The result of this is beautiful, realistically nuanced coloration for her nature-based sculpture.” —The James Renwick Alliance

Her work has been displayed nationally and internationally, including at the Victoria and Albert Museum in London and the National Gallery of Australia. She is represented in public and private collections. Also, she has been featured in numerous books, magazines, and catalogues. She was invited to be “Master Metalsmith 1999” by the National Ornamental Metal Museum in Memphis, Tennessee. She recently received the honor of being selected as a Fellow of the American Craft Council.

A chance encounter with metal as a boy (his father asked him to straighten out a bucket of recycled nails) established da Silva’s love of metal and the hammering process. “Holding the hammer is similar to the grip of how one strikes with a drumstick. It is important to establish a sequence. Accurate control of placement, amount of force employed and protecting the hands are basic in each application,” da Silva recounts. “When my Dad handed me that bucket of bent nails, I was not thrilled. Little did I know what doors they would open for me.”

As a student at Chabot College, da Silva studied ceramics and music. Ceramic classes also opened another door to Jack’s new work. “I loved to throw on the pottery wheel. Waiting for the clay vessel to ﬁrm up, I would then manipulate it into a more complex, undulating form. Now, I use a similar approach when forming copper or sterling silver sheet metal,” da Silva explained. Later, at San Jose State, da Silva studied metals with mentors Marcia Lewis and Dr. Robert Coleman. “I became fascinated by the plasticity of metal, its sensuous nature and versatility of form possibilities…realizing that smithing methods of raising and forging is where my heart lives.”

Da Silva received a Ford Foundation scholarship to study at Indiana University, Bloomington where he earned his MFA degree. At Indiana University, da Silva studied with the great metalsmith, Alma Eikerman, focusing on ancient and traditional metals techniques. “Professor Emeritus Alma Eikerman became an important mentor, inspiring me to pursue my interest in metals research. Alma emphasized sensitivity to form including creating tension in curves, calculating a dynamic footprint for an object, and the aesthetic of the composition of shapes,” da Silva remembers. “As someone once said, ‘Throughout history, items are symbols connected to events that deﬁne culture.’ Everywhere it seems that simple tools, such as hammers can open up a language of remarkable expression. They can work as keys to open the doors of personal aesthetics, creativity and history.”

While at Indiana University, Jack attended an Albert Paley lecture and met his other love, Marilyn Griewank. They married in 1983 and in 1987, Marilyn was hired as chair of the Jewelry/Metal Arts program at the California College of the Arts in Oakland, California.

Jack describes the Metalsmithing processes he uses to create his hollowware:
“Generally, I like to begin raising pieces from ﬂat sheet, such as Tangents 5, with smithing techniques using metal or plastic hammers. I am able to sink, stretch and compress the sheet metal ﬁrst into a shallow, generic hemisphere. That’s when the fun begins”

“I prefer to layout each individual area that I intend to develop. Then, I selectively manipulate these areas from the both inside and outside to create volume. By paying careful attention, I can redistribute and control how the metal thins or thickens, to gather or spread the metal from one part of the form to another”, da Silva explains.
“This requires good hammer control taking thousands of hammer blows. Later, the surface is smoothed by planishing the inner/outer surfaces of the metal form over metal stakes with a steel hammer.”

“As a practicing artist I also love to teach. I ﬁnd that continuing to create new designs can bring insights for me that I can share with students. The importance of how the hand and imagination combine into seemingly endless possibilities is the basis of why I will continue to teach metal arts” da Silva stated. Jack continues to exhibit internationally and his work is represented in public and private collections in the USA, Portugal, South Korea. This includes one of Jack’s jewelry pieces on permanent display in the Victoria and Albert Museum in London, UK.